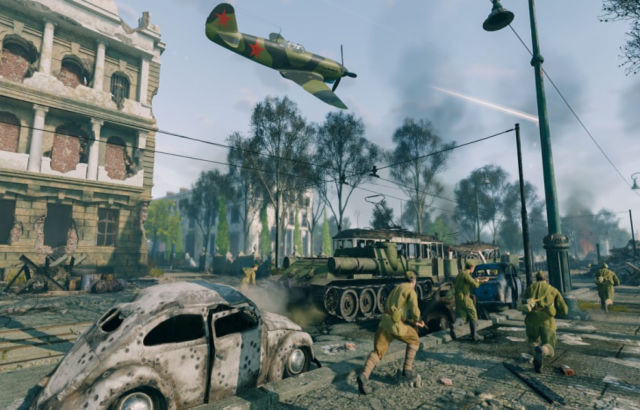 Gaijin Entertainment and Darkflow Software announce that the Battle of Berlin is now available to all Enlisted players. Game balance, game modes and the progression system have been thoroughly polished during the Closed Beta testing period of this new campaign for the online military shooter. New missions and 11 extra levels of progression have also been added to the Battle of Berlin that unlock new squads, weapons and military vehicles. The new Battle Pass season has also started in Enlisted that brings new rewards for all three available campaigns.

One of the new missions will take players to the Lehrter Bahnhof railway terminal. This is the location where the Wehrmacht will go on a counter-offensive in “Invasion” mode, where it will be the Red Army holding their ground. The train station is large enough inside to use armored vehicles, while the infantry storm the administrative buildings. New squads, weapons, tanks and planes can now be used in these battles, including the 137 Infantry Division flamethrower squad equipped with the ROKS-2, soldiers with DPM machine guns, Yak-3 fighter planes, Me.410 B-1 attack planes, SU-85M  and Panzer IV/70 (A) SPGs and more.

Lone Fighters mode with only one soldier per player instead of the squad have been significantly revamped in Enlisted. From now on it’s focused on the needs of extremely challenging and hardcore shooter games. Friendly fire is turned on here, so as in real combat one has to watch their line of fire, and be very careful where they throw their grenades and explosive packs. The interface has also changed, i.e. the minimap and kill log are no longer visible in this game mode. So in order to be sure if the enemy shot was a kill, players need to watch the fallen body for movement, just like in real life. It’s important to add that the signature Squad Mode of the game is still all about the golden middle between the dynamic and realistic approaches to shooter gameplay.

The new season of Battle Pass brings new rare weapons and vehicles: the experimental Degtyarev PDM-42 SMG, a fully automatic M1A1 Carbine version produced for the US Marines, the Finnish SMG KP-26 by Aimo Lahti, an experimental rifle based on the Gewehr 43 with 7.9 mm Kurz ammo, as well as five tanks and one plane. Other Battle Pass rewards will help players with soldier recruiting, leveling up, gear and customization.