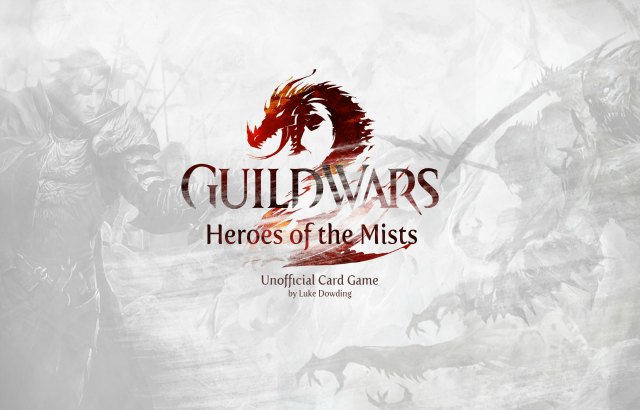 This is not a joke, there actually is a playable Guild Wars 2 card game out right now. Heroes of the Mists is a fan-made CCG game that is based off ArenaNet’s MMORPG.

UK web designer Like Dowding is the creator, and the game can be played for free right now on his site. Each of the cards are expertly designed with art style that will be familiar to many who are familiar with the MMO. You’ll see your favorite locations, characters and races too. The base deck has over two hundred custom cards at the moment, with more in development.

But how exactly does the game play? Well, the objective of this CCG is to defeat the opponent’s Hero. Each Hero will start with 80 Health and the first player to receive 80 Damage to their Hero loses the game. Each deck must contain 40 cards each. And 10 of those cards will be given by the Profession you choose which are Skill cards.

The remaining 30 cards are a combination of Minion cards that will be the damage dealers. Every turn, players will spend Endurance to summon a Minion or Skill cards to damage the opponent Hero.

As it stands, the game does sound interesting. It’s a lot like other card games out there that shares a world with their MMORPG counterparts. There seems to be a decent amount of deck-building meta as well, considering the amount of cards already available to players.

I feel that ArenaNet should sit up and take notice. Branching out into the card genre seems like the popular thing to do these days. And I say that on the fact that Hearthstone, Elder Scrolls Legends and GWENT are all pretty big right now.