FFiesta Online is a 3D MMORPG set in a fantasy world filled with content ranging from quests to collectible cards; unlike many other games in this genre, the world is bright and energetic without any dark undertones. This is certainly a game that would be appealing to a younger audience. It was developed by Ons On Soft and first released in 2007 for a wide range of countries.

There are six classes in the game to select from however one of them is unlocked later in the game; each class has a unique play-style and different skill trees. In addition to this, players can take jobs which further customize their character.

Combat in Fiesta Online is straight forwards and nothing too special; players activate special abilities and can target specific characters or an area. There are also passive abilities which are not up-gradable. The PvP in the game is limited and each town has an area dedicated to it, this section of the game can be very unbalanced against players who purchase items from the cash store.

Killing monsters will cause them to drop collectible cards which can be traded between players and offer a variety of rewards; some card give players special titles and others result in exclusive items such as pets. Players can acquire titles in various ways by meeting specific criteria, some of them also reward the player with a skill point when they are unlocked. 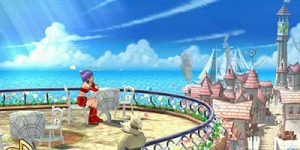 One of the most popular features in the game are the various social features; the biggest of these are the Guilds and marriage features. The guilds in this game are relatively unique, they offer the standard PvP experience with large scale guild battles but they also offer another service. Each guild has an Academy which reward lower level players and once a player reaches level 60 they graduate from the Academy; players starting from level 10 can earn money and items by participating in them.

The biggest feature in the game is the in-game marriage system; the system is more detailed than most other MMORPGs which also have this feature. Players need to purchase a wedding application and then buy a ring before proposing, accepting the proposal is announced globally and the couple can invite up to 30 guests for their wedding. Once the ceremony is completed they receive special rewards such as pets.

Fiesta Online has a lot of content to offer players; it’s main focus is on the social aspect of MMORPGs while also offering detailed customization and some limited PvP options. Though this game was released almost 10 year ago, it still has a dedicated fan base and features some of the best social content seen in any MMORPG.