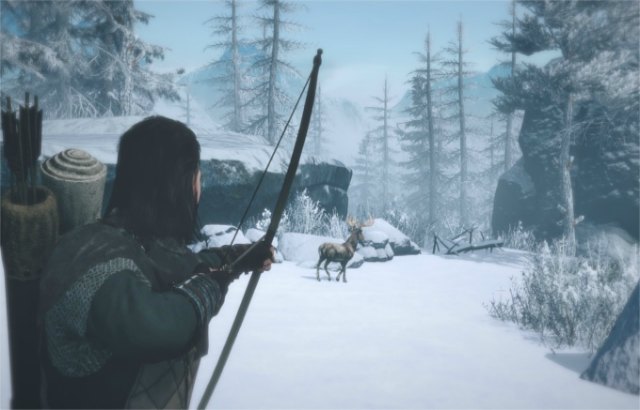 Rise of the King is a brand new third-person action adventure game. It’s set in a medieval fantasy world with a focus on survival and investigations.

The brain child of Revelation Games, Rise of the King has been independently developed up until now. The Kickstarter campaign for the game is now live, and players can start pledging to bring development to the next phase.

I really like the premise of the game and what the game play looks like at the moment. From the introduction video, it’s easy to see that a lot of thought was put into it to make the game stand out.

The first hint that this might be interesting is the tidbit that there isn’t a reliance on magic. There are no potions, no special abilities. Players must use their wit and the environment to survive. Your character uses a range of real world weapons and the combat is unforgiving.

Set in a winter part of the world, the game looks pretty much like Skyrim too, without the magic. Players are following a narrative to investigate a missing child and must hunt, gather and build shelter in order to survive.

There is an emphasis on story too, which is always great to here. Dialogue text reading is back, and very much in-line with classic RPG games. As far as game play goes, it’s still early days but the combat animations and movement looks good.

Check out the Kickstarter page if this is something that sounds interesting to you. I for one always welcome new RPG games, and while it isn’t an MMO per say, it’s worth a look.