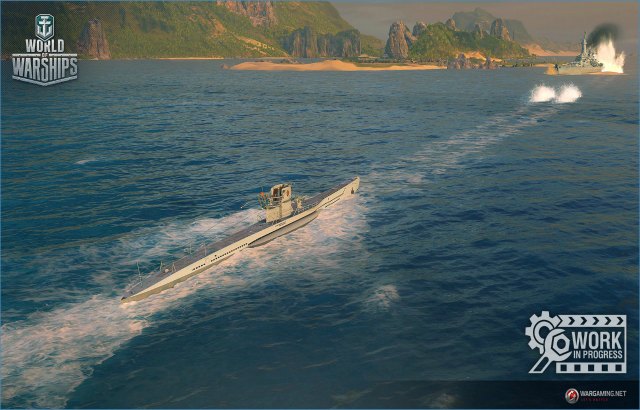 After recently announcing the upcoming arrival of submarines as playable vessels in World of Warships, publisher and developer Wargaming has unveiled more details on their unique features as well as their plans for the launch of the long-awaited ship class during gamescom 2019.

Three nations will be the first to receive these stealthy combat machines, including:

In the next couple of weeks, players will be able to get a first glimpse of submarines during the upcoming Super Test phase. Prospective commanders can already look forward to this fall’s PvP event, which will let them try out submarines from the first three nations for a limited time to evaluate the changes brought by the introduction of the new ship-class before its actual release. Wargaming is looking to expand the selection of submarines to other nations in the future, with the Japanese fleet to follow, as well as the future introduction of additional researchable and premium ships.

The uniqueness of submarines resides in their ability to appear in places where they are least expected, dislodging enemy ships from choke points via surgical torpedo volleys before disappearing again. Submarines will have the best stealth capabilities in the game, as they will be able to dive below the ocean surface and evade visual detection as long as their supply of oxygen allows it.

This brand-new ability will let players launch surprise attacks on the enemy team and become invulnerable to most types of damage. Submarines will however be relatively slow and have the least amount of hit points, requiring from prospective commanders thoughtful use of their unique mechanics, as well as good positioning and situational awareness to turn the tides of battle.

When submerged, submarines will lose vision of enemies in the battle. They will need to plot their course and detect other ships with the help of another new mechanic, the hydrophone. This feature will allow them to determine the direction to the nearest enemy ships and visualise their surroundings when diving, actively helping them with their spatial awareness.

Players will also gain the ability to adjust their aim after firing and to alter their torpedoes’ course by pinging certain parts of an enemy ship using their sonar. This new feature will however be a double-edged blade, as it will show the submarine’s position on the minimap for a short period of time.

The introduction of submarines will also bring new weapons and mechanics specifically designed to counter them. Destroyers will be particularly efficient at hunting down submarines and special zones will appear on the surface once they get close to their prey. Once they’ve acquired a target, destroyers will be able to use brand-new weapons designed to sink submarines hiding at high depth: the anti-submarine mortars and depth charges, which will be activated automatically when they sail above their opponents.

Wargaming has also launched today the new update 0.8.7., the second of the French Arc, which lets player research and unlock the complete line of French Destroyers.