Is World of Warcraft's Slow New Player Leveling A Blessing Or A Curse?

Is World of Warcraft’s Slow New Player Leveling A Blessing Or A Curse? 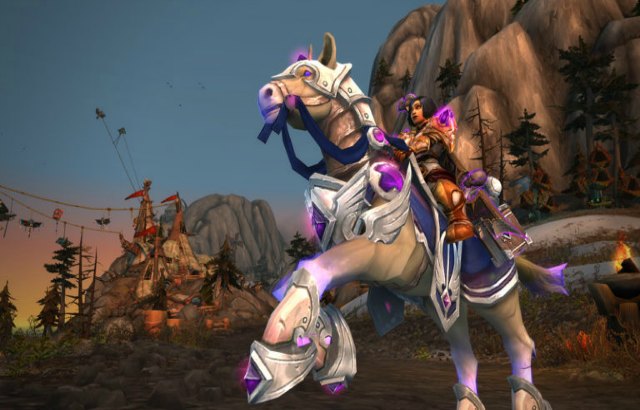 A month or so ago, I finally got the opportunity to jump into World of Warcraft for the first time. As someone who is passionate about MMORPGs and reviews them often, this was the baptism of fire. Getting through the most popular MMORPG of all time is a bucket list item that needed completing.

As of today, I’m currently loitering in Northrend in WoW’s second expansion, Wrath of the Lich King. So for today’s article, I thought I’d share some of my experiences of leveling through Azeroth from the perspective of a new player. Yeah, it’s rare I know, for someone who’s been playing MMOs for so long to not have played World of Warcraft. Anyway, let’s start with the pace of leveling.

I didn’t quite know what to expect when I made my Human Warrior for the Alliance. For starters, I didn’t realize just how big the starter maps were, or maybe that’s because I was moving on foot. Naturally, the leveling progression is the first thing you notice, and I can tell you that as a new player, it is pretty slow. That’s not necessarily a bad thing however! WoW’s questing design has been revamped a couple of times many years before I jumped in. The questing isn’t extraordinary but it still offers a great window into the world of Azeroth.

Quests are often fun and witty, while there are the usual fetch and kill quests among them. Zone story lines introduce fun characters and narrative arcs that are interesting. But most of all, you get the sense of ‘I need to do it all” for the XP. That is not the case however, especially for pre-expansion zones. Most of the time I found myself out leveling the zones and moved on before I could complete all the quests.

That however I suspect, is normal due to WoW being thirteen years old, with majority of the player base being at end-game. This will change in the upcoming 7.3.5. patch though, which we’ll explore in-depth when it comes out.

It’s during my adventures in the two early WoW expansions that I felt things starting to slow down. Once you begin questing in Outland for The Burning Crusade, I definitely felt that I needed to do every quest in addition to running a couple of dungeons each level to move along. In Northrend, that feeling is amplified, and the slow journey to level 80 toward the Cataclysm expansion is sinking in.

The slow pace at least to me, is a blessing. With no friends and no real rush to get to 110 to raid, I’m able to soak in so much more of what Blizzard has made over the past decade. And since I’m playing the content back-to-back without any breaks, I am literally playing through the content and witnessing its changing quality first hand. Quest chains feel more epic, are longer to complete, and has some great narrative payoff with cut scenes. This is especially true in Wrath of the Lich King, which involves one of my favorite characters from the lore, Arthas.

Why You Shouldn’t Worry About Jumping In

If pacing is a big deal to you, and you’re used to fast progression in modern MMOs, I’d say not to worry. You’re probably going to go through that experience once, because there are systems in place that will help your alts. For starters, there’s Heirloom gear that you can obtain in-game. These scale with your level, in addition to awarding bonus XP which makes these armor sets incredibly useful for leveling new characters. They’re also bound to account, so you can send them to any of your toons, and can be upgraded into pretty high levels for later content.

Secondly, I’ve already mentioned Patch 7.3.5. That new zone scaling system is going to iron out a lot of leveling issues that should make the leveling journey more cohesive, and well-paced. As for final thoughts about the leveling, I will say that I found it a blessing. Too many games push new players to where their end-game crowd’s at, and I hate that. I have no regrets jumping in this late into WoW. I’m able to see just how much this game has influenced new titles with its early ideas and content. At the same time, I’m excited to be part of this universe for the upcoming expansions as well.