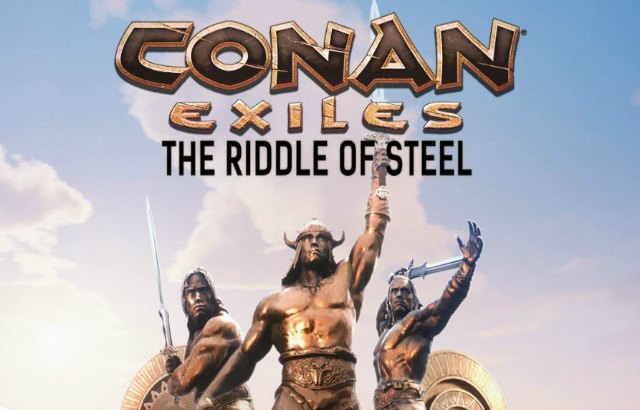 Funcom will this week be releasing the sixth DLC for Conan Exiles, the studio’s bestselling title of all time. The DLC is named after The Riddle of Steel, central to the plot of the 1982 movie featuring Arnold Schwarzenegger as  Conan the Barbarian, and is part of the game’s one-year anniversary, which is also celebrated with a free update (containing two brand new dungeons) and a prolonged Steam Free Weekend (May 8th – May 12th).

The new DLC will contain several unique statues and figurines of Arnold Schwarzenegger as Conan, as well as iconic helmets from the first movie, commemorative warpaint and other decorative items.  The Riddle of Steel is not part of the four core DLCs Funcom have planned for 2019 and will therefore not be included in the Year 2 Season Pass. Instead the studio has simultaneously released a free update, which includes two new dungeons, a total revamp of several locations, new NPCs and a new feat, “Witch Doctor”, allowing you to summon wights and skeletons to your side.

The Riddle of Steel will be available for PC for $ 6.99 (other regional prices may apply) later this week, and will follow on Xbox One and PlayStation 4 shortly after.

The Riddle of Steel

18 Statues and figurines of Arnold Schwarzenegger as Conan.

5 iconic helmets from the movie, of characters such as Thulsa Doom and Rexor.

5 unique placeables from the movie, such as King Conan’s Lion Throne.

6 statues and figurines of Valeria from the movie Conan the Barbarian.

6 statues and figurines of Subotai the Hyrkanian archer.

3 decorative warpaints from the movie.

New items, both lootable and craftable.