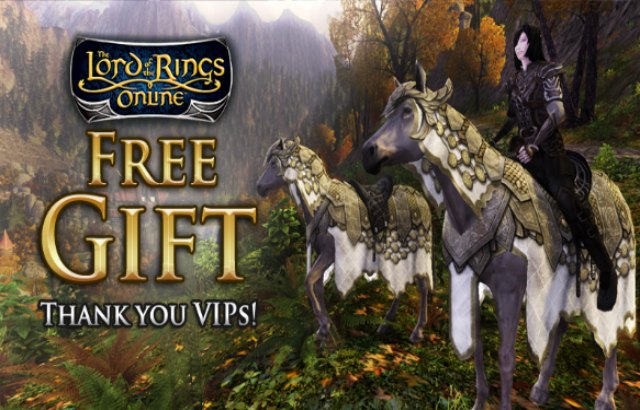 Lotro otherwise known as The Lord of The Rings Online, is giving all current active subscribers a free gift. Beginning February 6th, current Lotro subscribers can log into the game to receive a free account wide mount. Called the Steed of the Eldar, the mount comes with +68% speed and 250 morale points. This makes the Steed of the Elder one of the best horses to use in the game.

The mount will also come with matching War-steed Caparison, Saddle and Halter.  This means that players will be able to customize their War-steeds to look exactly like the normal version.  As long as players have acquired the Riding Trait, they are free to use the horse whenever.

Lotro developers Standing Stone Games are giving away this “special” gift as a thank you to VIPs for their continued support of the game. The offer will last until March 13th, which will be right before the game’s 10 year anniversary in April.

Having seen the mount, the design is very pretty on the eyes. The white Caparisons have an armored look to it, which is a great contrast to the festival mounts players have been getting lately.

The free gift will apply to all players on all the ten servers, but players will have to log on to each server to claim it for their characters. Upon logging in, the skill for the steed will be located in your inventories.

However, if you have claimed the gift on one character on one server, there is no need to claim it again. This is a really nice touch from the developers. It remains to be seen if this is one of many more loyalty gift promotions in store for Lotro players this year.

Lotro launched in 2007 and will be celebrating its 10 year anniversary in April 2017. Check back in with MMOsWorld for future coverage.