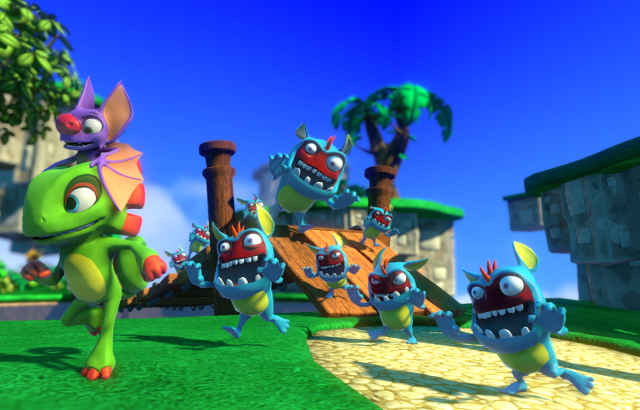 Of course, Yooka Laylee doesn’t sound like a mesmerizing title. However, developer team17, is responsible for one of the most successful gaming-series of all time, Worms. If you grew up in the 90’s you must have played worms. The artillery strategy game featured two teams of worms fighting one another. While more titles from the worm series kept popping, the game has peaked in it’s popularity and now Team17 are working on another old-school type of game.

In our days, parents complain about the amount of time their children are spending alone on the computer. The parents think that because they have spent more time outdoors playing with friends they were more social. However, the reality for the children is that they are extremely connected to their friends, just not physically. The technology connects children much more than before the smartphone era. Why am i saying this? Because Yooka Laylee brings back from the dead a concept which was extremely fun and has almost vanished.

Oh yeah, I’m talking about co-op mode. since most players play alone in the room, developers have eliminated the co-op mode. But, Team17 have opted to materialize the mode once again. It is a hassle to play in split screen, so Team17 decided to not split it. They want people to play together on the same screen and share in person their reactions from the game. As you can see in the trailer, the game features 8 different game modes for multiplayer and co-op. You can play online, but it seems like sitting next to each other and playing this is much more fun. Yooka Laylee is more children oriented, but it seems like a game that adults might enjoy as well.

Team17 will publish Yooka Laylee on April, until it happens we will keep you updated. What do you think about this game? is it going to be as fun as worms was?