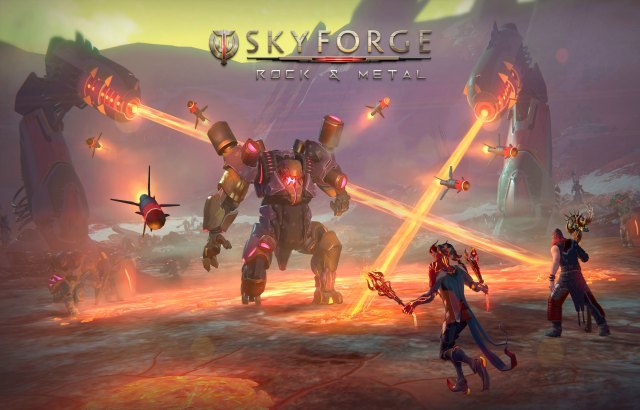 Free to play MMORPG Skyforge has released its latest expansion, Rock and Metal, for the PC with PlayStation 4 and Xbox One releases on the way. Players must now take up arms against the deadly reptilian Draconids of Terra in an all-new dungeon: the Toxic Wasteland! The new expansion also unleashes the power of the Black Metal Collection, an amped-up arsenal of weapons for the Firestarter, Soundweaver, and Grovewalker classes and an all-new unlockable Elder God form to aid Immortals in their quest to save Tera from its cold-blooded invaders!

In this new adventure, players are tasked with navigating the industrial badlands of the Toxic Wasteland, defeating Draconid patrols, and finding a way to underneath the mysterious impenetrable energy dome found in the dark excavation site below. Amidst the scorched earth, toxic swamps, and deadly fumes, players will encounter plenty of hazards and resistance efforts, but intelligence can be gleaned from certain safe zones. Fighting through the dig site will be tough, but it shouldn’t be much of a problem for Aelion’s finest!

To aid in this battle, a new unlockable Elder God form is now available. The Aspect of Vengeance is a powerful ranged form that can be accessed by any class! This gigantic blue marksman wields mastery over bows and plasma cannons, and can summon divine lightning, volleys, and punishing weapons from the sky. Utilise the Aspect of Vengeance’s supreme deadeye abilities, and let none escape your sights alive!

For Immortals interested in extra demi-power, the “Rock and Metal” expansion offers the Black Metal Collection, an amped-up arsenal of weapons for the Firestarter, Soundweaver, and Grovewalker classes! Inspired by the dark edges of rock, punk, and metal culture, these weapons are raucous, resilient, and ready to rock enemies to their core. The collection, consisting of three new bundles, can be accessed in the in-game store and each provides an exclusive weapon, class unlock, premium time and ether catalysts to aid in the path to becoming a rock ‘n’ roll legend.