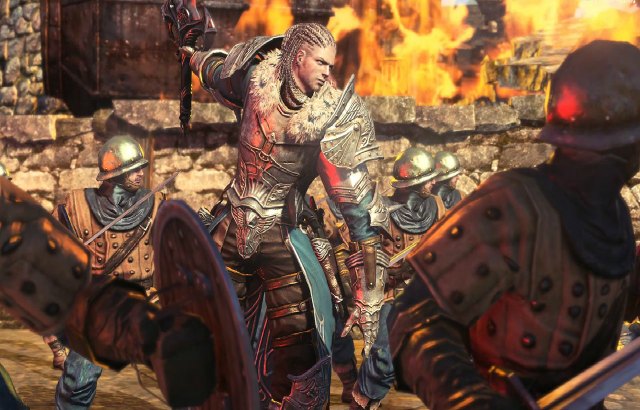 This November, the long-awaited Kingdom Under Fire 2 — the latest and most ambitious entry in the award-winning series — will be released for Windows PC in North America and Europe! Today, Gameforge is excited to introduce another of the five character classes of this fantasy epic which combines the real-time strategy (RTS) and massively multiplayer online (MMO) genres.

Fueled by the power of dark rage, the Berserker unleashes unholy wrath and strikes fear into the hearts of enemies across the battlefield!

In the carnage of battle, the Berserker stands out for his brute force, huge health pool and staying power. Drawing on a core of rage, he can carry out debilitating attacks while benefiting from a shield that absorbs damage. Armed with weapons imbued with dark energy, he is the ultimate front-line warrior, capable of smashing enemy ranks with his obliterating attacks.

Legends from a mysterious race of Exiles spoke of a great man with unparalleled power who was destined to be the one to unite and lead the Exiles. There was such a man, who listened to the ancient legends and began a quest to find the sword once wielded by the mightiest of creatures. However,  just as he was about to attain the glorious goal of all the Exiles… he was viciously betrayed and lost everything. After barely managing to survive, he turned to the Azilia Knights of a faraway land to regain his power and one day punish his betrayer.

The Berserker is one of five character classes playable in Kingdom Under Fire 2. The full list of classes is as follows: Berserker, Elementalist, Gunslinger, Ranger, Spellsword.