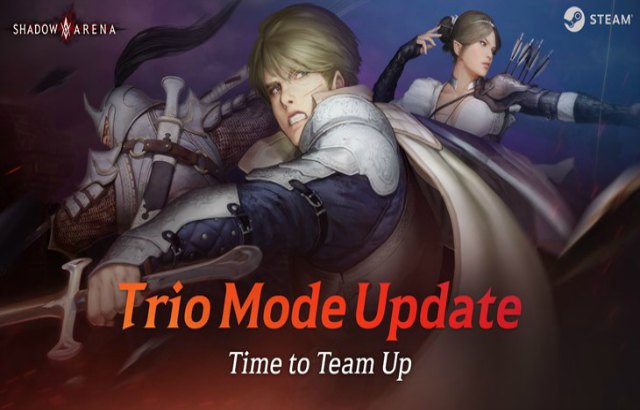 Pearl Abyss announced today that a new Trio mode has been added to Shadow Arena. Players can now battle against others as a team and experience new features that are also available in the new mode.

The Trio mode is a new in-game mode in which a total of 5 teams can participate in the battlefield as a party of three. When a Hero dies, the Hero can get revived by a teammate at any time or revive automatically when the automatic revival time passes as long as another member of the team is still alive.

The Trio mode also features the new Ascension system where the Relic of Ascension spawns in the middle of the Dark Fog 15 minutes after a match begins. Players can then enter within the red line around the Relic of Ascension which fills a gauge to charge the relic. When a certain team completely fills the gauge, the team will Ascend and win the match.

Moreover, new objects called Blackstar Fragments will appear randomly across the map. These fragments will break when players go near them and once they are destroyed, all team members will get additional Attack and Defense Points.

The 2020 Asia Champions Showdown will be held on November 22 to determine the most powerful trio in the Asia server. After running a total of 4 rounds, the final rankings will be announced based on the sum of points earned from each round. Those who are interested in participating can sign up through the official website.