Star Trek Online: Everything You Need To Know About House United

Star Trek Online: Everything You Need To Know About House United 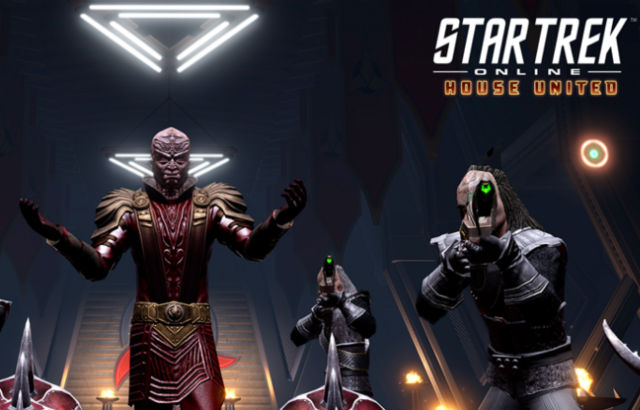 Perfect World Entertainment Inc., a leading publisher of online games, and Cryptic Studios announced that Star Trek Online’s newest season, House United, is now available on PC and will release on PlayStation®4 and Xbox One on August 3. The free-to-play MMORPG based on the Star Trek Universe invites Captains from around the world to experience the highly anticipated finale to the Klingon Civil War, a longstanding conflict which has torn the Klingon Empire apart.

The new season introduces two exciting featured episodes centered around Star Trek: Discovery’s L’Rell (voiced by Mary Chieffo), as well as Aakar (Robert O’Reilly from Star Trek: The Next Generation), General Martok (J.G Hertzler from Star Trek: Deep Space Nine) and Adet’Pa (Rekha Sharma from Star Trek: Discovery). House United gives Captains the opportunity to earn exclusive rewards by completing tasks in a Special Event and participating in a brand-new Task Force Operation. Plus, anyone who logs into the game on PC today (May 25) will unlock a free Experimental Ship Upgrade.

After travelling to the sacred planet of Boreth and descending into the pits of Gre’thor, J’Ula, matriarch of House Mo’Kai, has resurrected the famed Klingon Warrior, L’Rell (voiced by Mary Chieffo, who originated the role on Star Trek: Discovery). L’Rell will be a guiding light for J’Ula on what it truly means to be Klingon, as players will have to prove themselves and build an army, before heading to Qo’noS for the final epic battle. Captains will also encounter emblematic characters such as Aakar (portrayed by Robert O’Reilly from Star Trek: The Next Generation and Star Trek: Deep Space Nine), General Martok (played by J.G Hertzler from Star Trek: Deep Space Nine), and Adet’Pa (voiced by Rekha Sharma from Star Trek: Discovery).

Check out the third season of Star Trek: Discovery: https://www.cbs.com/shows/star-trek-discovery/