The Division 2: The Gunner Specialization Is Fun (Impressions)

The Division 2: The Gunner Specialization Is Fun (Impressions) 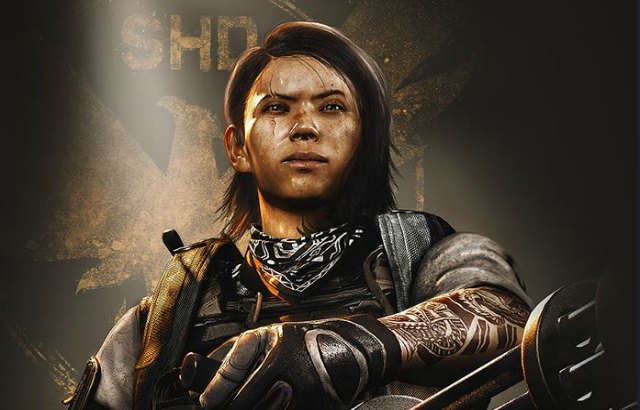 The Division 2 has deployed its Title Update 4 yesterday, which brought some brand new content to Massive’s cover-shooter MMO. Among them is the game’s fourth Specialization, the Gunner. Like the game’s other Specialists, the Gunner wields unique weapon and in this case, it’s the high RPM mini-gun. It’s a free update and everyone can unlock the Gunner, but Year 1 Pass owners can get it instantly. Everyone else will need to complete a series of challenges in-game before unlocking the specialization. We’ve played with Division 2’s latest class, and here’s our impressions.

Logging in after the update will take you to the Quartermaster at the Base of Operations. There, you’ll learn about a new weapon that’s been in development. You’ll see the option to inspect the specialization on the table, and that’s where you can begin the Gunner challenges. There are 5 stages to complete in total, and only by finishing stage 5 will you be able to play as the Gunner. Each stage of the challenge has objectives. For example, you’ll need to capture a control point with the Sharpshooter spec active. Some of them are tedious especially if you haven’t done some previous leg work. Otherwise, these can be a nice change of scenery and may even take you to activities and places you haven’t been to before. All in all, and if doing these in a group, it won’t take you more than a few hours to unlock. Additionally, for Year 1 Pass owners, you can still take part in these Stage challenges. Doing so will grant you exclusive cosmetics that no one else can get. 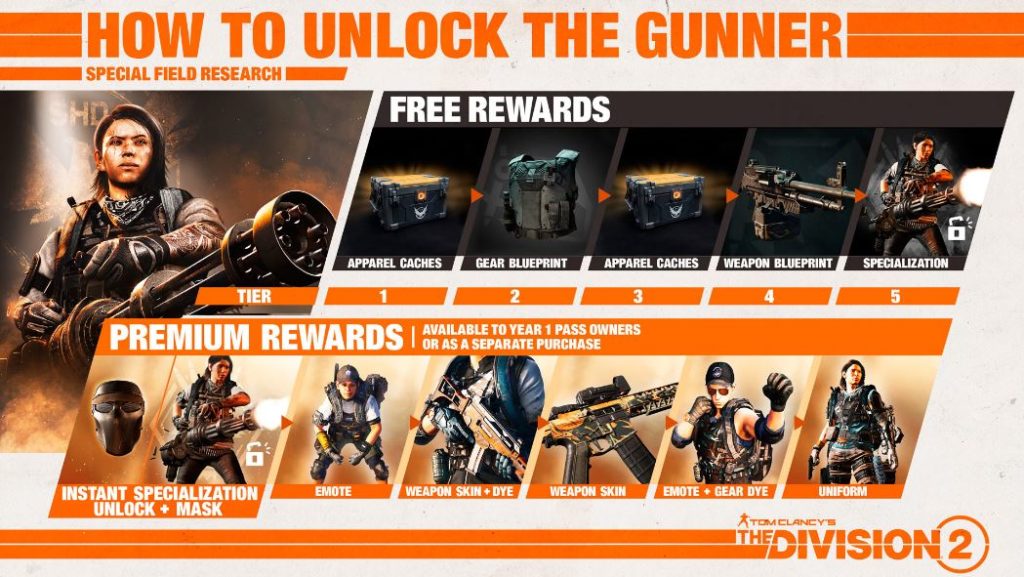 Now comes the fun part: playing as a Gunner. As far as first impressions go, the Division 2’s latest specialization makes me feel like a badass and there’s no other word to describe it. The mini gun is of course, a modified Gatling gun that once wielded, means you’re movement is pretty much static. Holding down the right mouse button gets the thing spinning, and left mouse click fires all 150 rounds gloriously. With such high RPM, standing out in the open and melting Elite enemies is extremely satisfying. If your gear build factors in other buffs and bonus damage to enemies, even better. You can’t run around with it, but you can walk and aiming feels decent with the thing. You’ll also get bonus armor with the mini-gun wielded in case you’re getting shot at back. As far as specialization ammo goes, it suffers from the same issue with the others – it’s scarce, and unpredictable when it may drop. You can of course mitigate that by playing in groups and using bonuses from the Tech Tree that makes ammo come easier. Overall, the Gunner has introduced a fun way to play, that to be fair, already exists with LMG players and builds. The balls to the wall and out of cover run-and-gun play style isn’t new. But it’s sure as hell more mainstream since this update. Gunners are also incredibly strong for clutch situations. That final push out of cover to take down a boss or mechanic, and more for PvE means experimentation will be fun. For PvP, it remains to be seen. 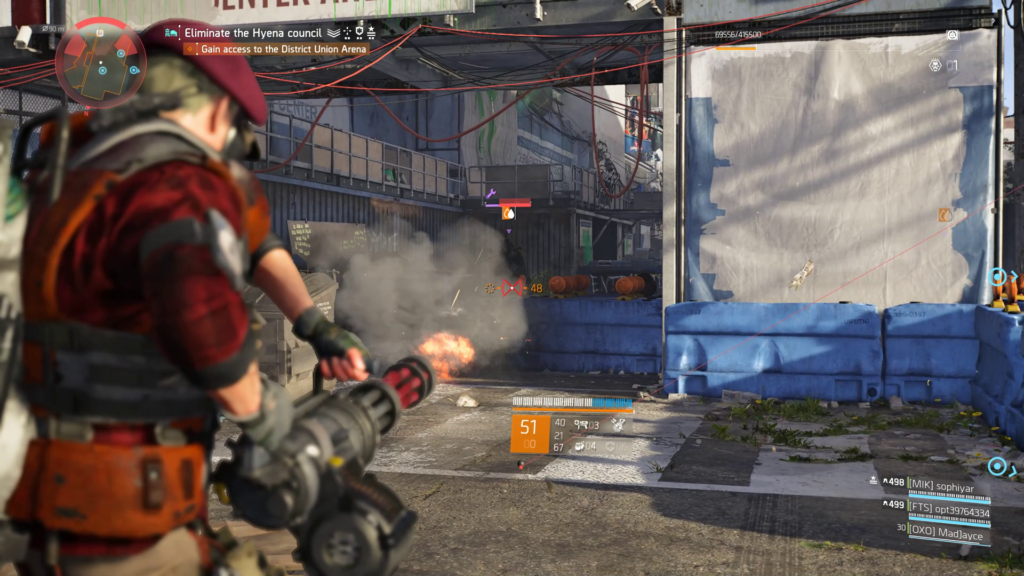 Tech-ing The Tree For Success

A new Division 2 Specialization also means a new tech tree, and the Gunner has plenty of tools at his or her disposal. Tech trees in general got a massive update with this patch, so across the board some buffs and stuff will look and sound different. Nevertheless, Gunners have cool toys to play with. First of which is the the Foam Grenade. When unlocked you can throw them at enemies clustered together to ensnare, which means you can then pull out the mini-gun and mow them down. It’s a pretty basic combo but goes well with other passives in the tree. You can grant armor for each kill, or even increase the rate of fire. When it comes to Skill, the Gunner uses the Pulse – which isn’t popular – as the main one. The Pulse will now grant Gunners a directional conal Confuse, making all enemies affected stand up or out of cover so again, you can shoot em all down. Elsewhere, it’s obvious that the weapon pairing for the Gunner will ideally be the LMG. The LMG portion of the tech tree has an added unlock that gives you a +50 ammo pouch for your LMGs, which is awesome. 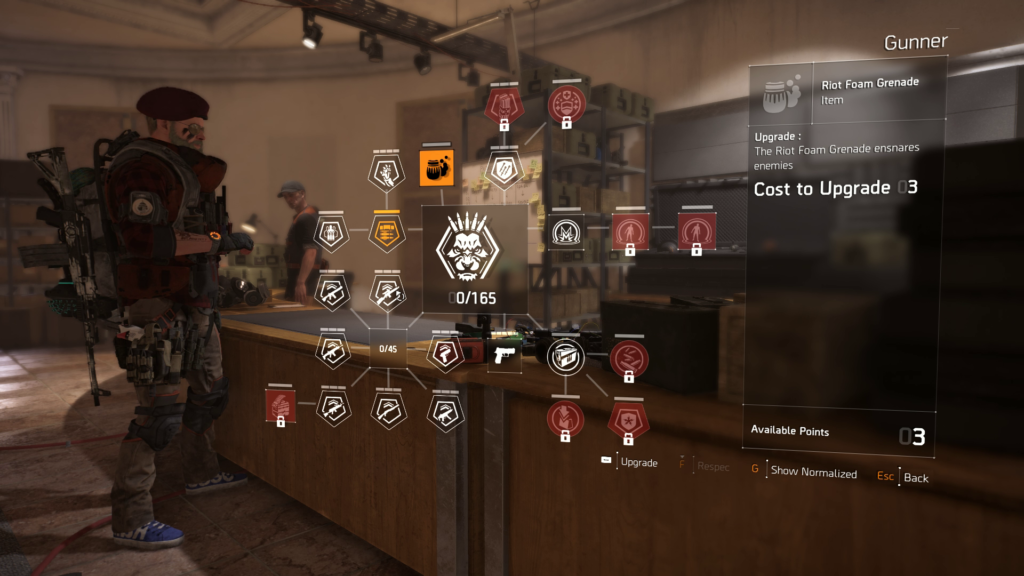