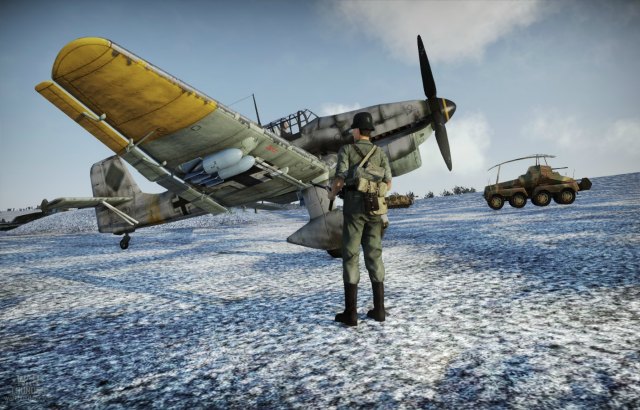 Gaijin Entertainment and the vehicular combat MMO War Thunder commemorate the recent centenary of the Royal Air Force this upcoming weekend. Available are a host of in-game specials, including the chance for all players to obtain a new and unique model of the famous Spitfire, as well as a massive discount on a special pack of premium aircraft perfect for British aviation enthusiasts.

Britain, which is one of the oldest nations playable in War Thunder, is a favorite of hundreds of thousands of virtual pilots from all over the globe, fascinating players with its exceptional aircraft ranging from the trusty Gloster Gladiator biplane to the impressive Hawker Hunter jet fighter. Almost 100 different aircraft are playable in total, including not only fighters, but also well-known World War II veterans such as the Swordfish torpedo-bomber that helped sink the German battleship Bismarck, the Beaufighter as the world’s first aircraft designed to fit a radar device, or the Gloster Meteor, the only jet to participate on the Allied side in the war.

The country’s most famous wartime development, the renown Supermarine Spitfire, is represented in War Thunder with more than 20 different models alone. Players will be able to obtain a unique model, the Spitfire F.Mk.IXc equipped with four powerful 20mm Hispano cannons, for the first time ever during the centenary festivities by participating in an in-game tournament hosted on this occasion. A true legend both in real-life and in War Thunder indeed, the Spitfire is perfectly captivated in the recent episode of the game’s “Legends” series on YouTube: https://www.youtube.com/watch?v=d8PcdwbtZow

Furthermore, all players will be able to obtain a unique RAF decal to decorate their favorite aircraft with by fulfilling in-game tasks. Two rare premium aircraft, the Spitfire LF Mk. IX flown by Southern Rhodesian ace pilot John Plagis and the Typhoon Mk. Ib, will be available for purchase using the in-game currency Golden Eagles throughout the upcoming weekend.

And as a special treat for all British aviation enthusiasts, the War Thunder store offers a great selection of the country’s most popular aircraft bundled in the special “His Majesty’s Finest” pack available at a whopping 30% discount. Besides plenty of Golden Eagles and Premium time, the bundle includes the Spitfire FR Mk. XIVe flown by the Canadian John Prendergast, one of the last pilots to fly reconnaissance over Normandy ahead of D-Day, the multi-role strike aircraft Westland Wyvern and the Martin-Baker MB 5 prototype fighter, one of the most advanced aircraft of its time: https://store.gaijin.net/story.php?id=6120

More information about the centenary specials are available on the official War Thunder website: https://warthunder.com/en/news/5438/current/