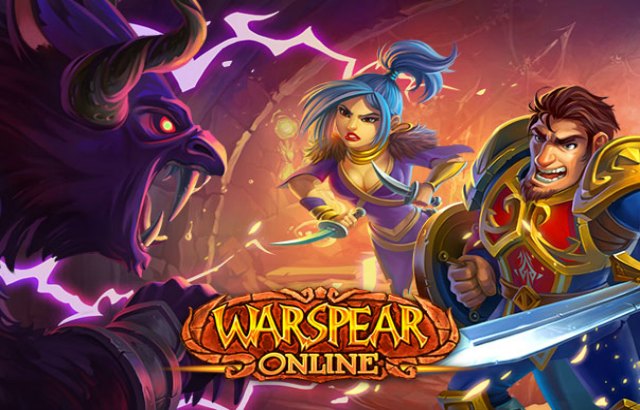 Warspear Online is a free to play MMORPG that’s available on Steam for PC and on Android for mobile devices as well. Originally released in June 2008, the game is now ported over to Steam, where players can check out the world and gameplay for free. I don’t turn down invitations to have a first impressions look, so I jumped in to see what the game is like and what the opening few minutes offers.

Old School In Every Regard

First things first, the game reminds me of the good old MMORPG days – Ultima Online and EQ. What really strikes out at me is the 8bit MMO feel that I get in-game. It’s almost like a blown up and full colored version of Pokemon on the Gameboy too. Character creation – which is the first thing you’ll do – is pretty standard. You get to pick between four factions, each have their own unique bonuses. Once done, you’ll select from four classes that are of the usual archetypes. You got Paladins, Mages and Warriors, but what I like is that there’s magic skills for all of em. So it doesn’t shoe box classes into doing a specific thing only.

Movement involves clicking (the game tells you to tap due to it being a mobile port) around the map to move. The same is done to interact with objects, initiate combat and talk to NPCs and quest givers. As it is a port, not many new mechanics have been added. Combat is still a dull affair, befitting the era in which this game comes from. You simply click on a mob or monster and fire off skills on your hot-bar. The animations are paperweight and you can hardly see them unfortunately.

My first introduction quests made me look after plants, take a tour of my faction’s HUB, speak to NPCs and of course, fetch and kill quests. It’s a buzzkill but lets not forget, 90% of MMORPGs begins this way. What I found disappointing is that the game does nothing to build upon the uniqueness of its factions. There are four to pick from, but none of the intro quests tells you anything about them, making them feel less unique.

In addition, there does not appear to be a thread for a main story. Once you’re done with the HUB starter quests, you simply move on to the next map to repeat menial tasks. These NPCs offer a little flavor about themselves or the world, but not enough to keep me invested I’m afraid. Perhaps it gets better in the letter levels, or perhaps not. But judging by its early levels, I think players will be having more fun in other parts of its PvE and PvP rather than the quests.

After hitting level two, the first thing that popped up on my screen was a cash shop promo. Level two! Some breathing space would be great, but that’s an inkling of what players can expect. The promo was for two packages for my class that contained gear, boosts and more that will speed up my leveling. From a neutral’s point of view, that will probably not sit well if you have something against cash shop progress items. In other words, one can take that as pay to win. A quick inspection shows that plenty of progression and convenience stuff will be gated behind the store. These includes more bags for increased slots, tickets and more. All of them can be unlocked using Miracle Coins, which is the game’s premium currency that costs real money.

Ultimately, it will come down to your taste and what you’re looking for. I like the concept of Warspear Online. It sticks to its gun by being an Old School RPG that’s cross platform for casual players to enjoy. There appears to be a decent amount of PvE and PvP, and it being F2P is great for accessibility. But I find there are way better options out there that offers so much for the same asking price of $0.