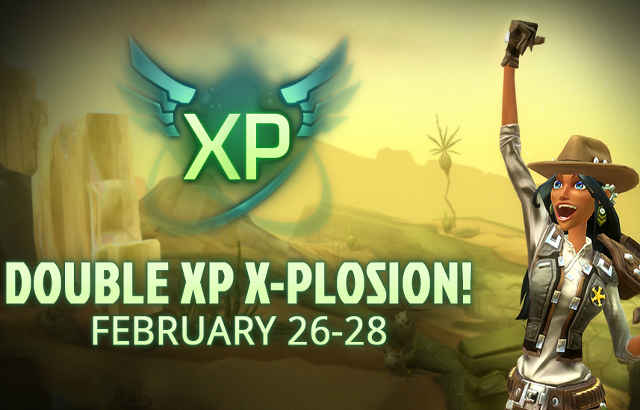 MMORPG WildStar has just started a new special weekend. For this weekend only, the Wildstar Double XP event will take place. Players will be able to collect double XP for all actions they make in the game. The team behind the game released a blog post earlier this week detailing the double XP weekend.

The team provided a detailed recommendation list to give players an idea about how to maximize this weekend. They suggested that players put their focus on completing dungeons, adventures and expeditions. Players looking to take on more difficult challenges can also use the Content Finder to queue for a range of missions in the game.

Players who are level 50 will be able to earn Elder Gems twice as fast and once the level cap has been hit, the gems will be converted into gold. Elder Gems can be used to purchase different items in the game such as Ability or AMP points.

The WildStar team have confirmed that the Wildstar Double XP X-Plosion event stacks with all of the Signature bonuses.

The Signature Subscription is the premium account for WildStar. The account has a large amount of bonuses attached to make playing the game easier and give a better gameplay experience.

There are also quite a few bonuses for Signature accounts which work nicely with the new double XP event. In addition to extra XP or Elder Gems, players will be a bonus 25% extra currency and 25% XP from missions.

Purchasing a Signature subscription also comes with a range of other bonuses. Players will have their ability cooldowns reduced by 50% and will also get priority access when in a queue. It’s also possible to create a guild and invite other players to join it; guilds are exclusive to the Signature subscription.

All the other bonuses attached to the Signature subscription can be found on the official website here.