World of Warcraft Previews Party Sync Feature for Next Patch

World of Warcraft Previews Party Sync Feature for Next Patch 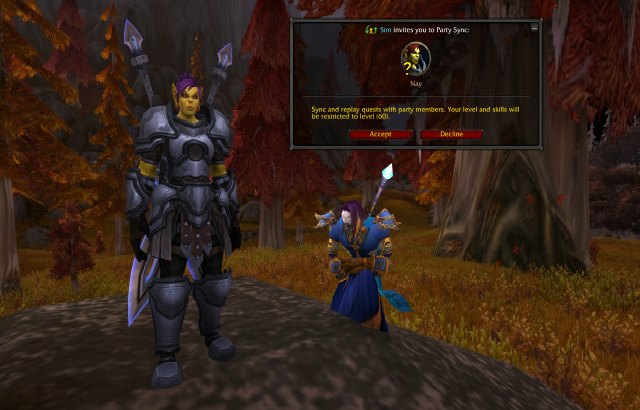 Over in Azeroth, World of Warcraft is getting a nifty quality of life feature that will enhance the experience when playing with friends of different levels, and we’re talking about the Party Sync feature. Blizzard has shared a preview of what the Party Sync is and what it can do – Come patch 8.2.5, players can activate Party Sync and everyone in the party becomes aligned to the same quest state and phase.

Levels will be temporarily adjusted to the content you’re doing, and party member’s stats are reduced and skills are limited to reflect the current level. So a good example of this is your higher level friends can join you in your early quests if you’re new to the game. This feature also allows players to repeat most quests with the exception of dailies and world quests. In many ways, this feature works in tandem with the level scaling that Blizzard introduced last year. With many new players coming into World of Warcraft thanks to Classic, the timing couldn’t have been any better. Plenty of other MMORPGs use this feature in some way, so in a way it’s about time Blizzard added this quality of life feature. What do you folks think of Party Sync? Is this a welcome addition or unneeded feature?