Conan Exiles is a brand new open world, surival sandbox game that was developed by Funcom and released on 31 January this year. Needless to say, the game has already hit peak sales and has covered all development costs.

Loads of players are already singing its praises, and you just can’t open up Twitch or YouTube without finding something Conan Exile related. So what makes this game fun to play? Here’s our full review. 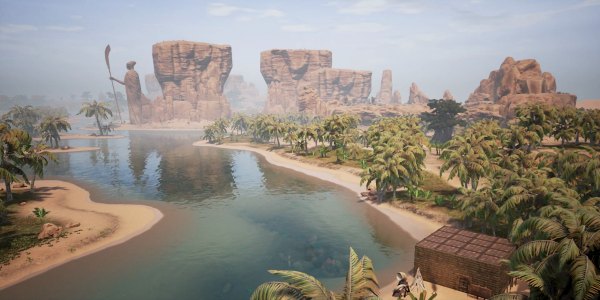 The World Of Conan As It Should Be

When players start the game, there’s an endless possibilities of tailoring your play style. You have a multitude of servers to choose from. Each caters to a specific play style such as PVP, PVE and even Role Play. Server selection allows you to choose which community you’d like to be a part of, but you aren’t held down to only one. You can make characters on as many servers if you want to.

Character creation is the next step and it’s great to see sliders. There are decent options for both facial and body features to pick from. Your race and religion are both authentic to the world of Conan, and the latter will play a part in end-game. Once you’re done sprucing up your character, you take your first steps into the world via a quick cut-scene. Conan himself appears to get you out of jail (or off a cross rather), and offers you a chance at a new life.

This is where the game truly begins. You start with nothing. No clothes, no weapons, no provisions. Each second that ticks by, your water and hunger depletes, so you must scour the land to find these basic necessities. Experience points are vital in the game. You get them by simply being online, and actively doing things. Chopping up wood or hacking at stone for materials will grant you experience too. Each time you gain a level, you spend points in one of many attributes to boost your character.

These can be for health, stamina, damage or weight. On top of that, you must learn recipes in order to craft items. Keep in mind you only get one shot at this so spend your points wisely. Beyond the basics, the sandbox nature of the game shines through from that point onward. What and who would you like to be? You could be a hunter, who’s goal is to kill the baddest beasts in the land and hang their heads in your house as a trophy. 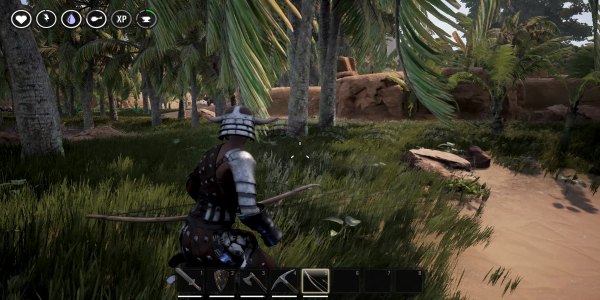 Beyond the basics, the sandbox nature of the game shines through from that point onward. What and who would you like to be? You could be a hunter, who’s goal is to kill the baddest beasts in the land and hang their heads in your house as a trophy. Or, you could be a scavenger scum, stealing from other players and destroying their shelters. There is no one way or right way to play the game and that’s awesome.

The combat system is mediocre but servers its purpose. Most weapons feel good to use and there are many from melee to ranged. Players will fight you often so it’s best to learn the system quickly. Wild beasts such as imps and crocodiles also inhabit the lands so make use of their hides for crafting and meat for food. The sandbox experience offers players so much fun, especially when played in groups with friends.

The icing on the cake is the authenticity of the Conan world. The armor designs, the weapons and the creatures are iconic to this franchise and it’s great to see them in modern graphics. The soundtrack is amazing too, and will pump you up for more adventure. 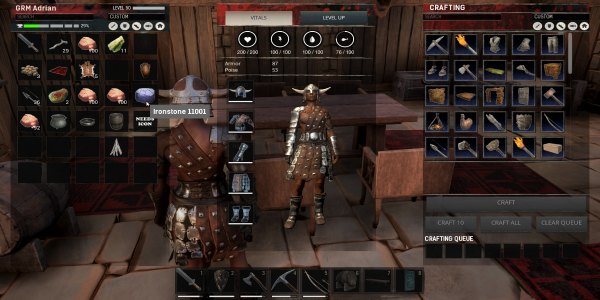 While there are many positives, the negatives cannot be ignored either. Being an early access game means that development is still undergoing, and the signs in game are showing. Bugs, glitches and crashes are not uncommon. To compound matters further, players have found loopholes within the game to exploit certain aspects of gameplay.

On another topic, ranged weapons and combat are by far the weakest aspect of Conan Exiles. It’s clunky and the aiming system is garbage. It was a lot easier and quicker to pull out a sword and just bash things up in melee range.

So is Conan Exiles worth the money and the time? If you’re a fan of this universe and franchise, the answer is yes. There’s so much to do in this survival game that you can literally pour hours upon hours into it and not be satisfied. If you don’t want to pay for a game that’s still in Early Access, you can check out alternatives. At the moment, only one other game shadows Conan Exiles in every department. That game is Ark: Survival Evolved.

Ragnarok Online Prime is welcoming its first update this week, featuring the Schwarzwald Republic cities of Einbroch and Einbech,

Proletariat today announced that Chapter 3: The Wardens, the latest update for their multiplayer action-spellcasting game, Spellbreak, is now available on