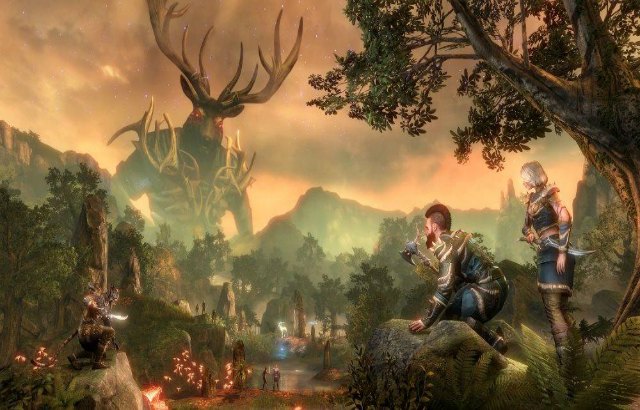 As we are nearing the release of ESO’s Wolfhunter DLC, the game has shared a preview of what to expect. The DLC is themed around Hircine’s Great Hunt. Players well versed in Werewolf lore will appreciate the lore and story in this update too.

Hircine’s realm, known as the Hunting Grounds, is a world locked in a perpetual contest between predator and prey. Filled with wild creatures both fantastic and mundane in addition to monstrous lycanthropes, it is a mystical wilderness as beautiful as it is dangerous.

Within Hircine’s realm, you will encounter many monstrous beasts roaming the wilderness, but be warned: The other teams competing in the event will do anything to win Hircine’s favor, and they can be just as dangerous as any of the Hunting Ground’s native creatures.

In addition to the area’s fearsome beasts and competitors, five challenging bosses guard the twisting paths of the March of Sacrifices, including wild witches, spriggans, and more. Of course, one of the bosses you must face is the target of your hunt: the Great Indrik, Tarcyr.

When stalking this incredible beast, the March of Sacrifices will challenge you and your team in new ways.

“As Hircine is the Daedric Prince of hunters and stalkers in the wild, the biggest element players will want to get used to in this dungeon is using stealth and taking on the role of a hunter,” explains Finnigan. “Some fights will require the use of mechanics not necessarily seen before. In particular, Tarcyr is quite different than anything we have done, and I suspect it will challenge players quite a bit.”

Hunting this majestic beast is no easy task, and you and your team need to be especially stealthy in order to scout out its location for an attack.