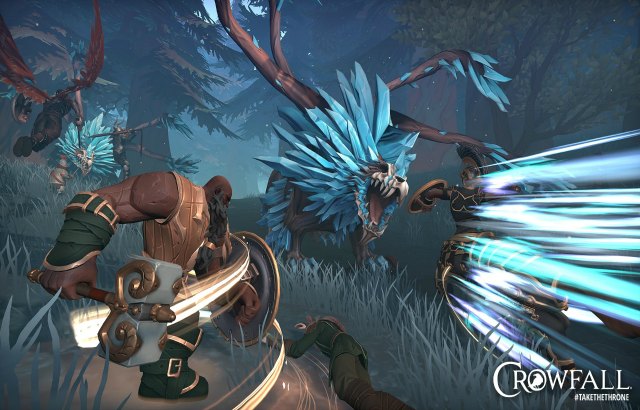 Crowfall, the competitive Throne War MMO, announced its latest Game Update, The Revival, today! The Revival delivers a significantly expanded set of options players can choose from to create uniquely differentiated Crow character builds. The system offers players more options in how they play while forcing tougher choices at each decision point.

With The Revival release, Crowfall is introducing Domains. Domains offer players the choice of one of 15 different groups of bundled Disciplines, from which players can choose one (from a set of three) based on their chosen sub-class. Domains are themed around a style of play, for example, the “Domain of War” or the “Domain of Shadow.” Within the system, there may be Disciplines that appear in more than one Domain. To be more clear, let’s say you wanted the Ghost Army power. To get that, you need the “Grim Reaper” major Discipline. That Discipline is found in both the Plague and Death Domains… which makes them available to Assassins, Duelists, Rangers, Frostweavers, Knights, and Myrmidons.

Ultimately, the addition of Domains offers deeper specialization by virtue of how the Disciplines you gain in a Domain combine with your other powers and your promotion class. For example, you might have a single poison buff that allows you to apply poison to your enemy when you attack them. But if you choose a Domain focused on poisons and select the relevant Disciplines, you could stack additional poison buffs and apply them all simultaneously intensifying the impact. That benefit is gained by your choice of a Domain and specific Disciplines within it. Two players with the same sub-class and the same Domain may choose different Disciplines creating a broad set of combinations – even when choosing the same Domain and sub-class.

“This update is a tribute to our players as it was their feedback that led us to innovate on the system. The system empowers players to be the architect of their Crow’s unique build – the power is in the player’s hands, it is only limited by our players’ imaginations,” said J. Todd Coleman, creative director for the game.

Crowfall is currently in Beta and will continue to release new game updates as they continue on the path to launch. The Revival also includes unique Campaign Rewards, each campaign war will now reward winning teams with unique rewards at the close of the Campaign and lastly, players will also see the game take another step forward in performance optimization.

As Crowfall continues to iterate on its innovative Throne War PvP experience, interested gamers can join the battle by registering for the free Beta at Crowfall.com.