Is TERA Worth Playing In 2020? Here's Our TERA MMORPG Review

Is TERA Worth Playing In 2020? Here’s Our TERA MMORPG Review 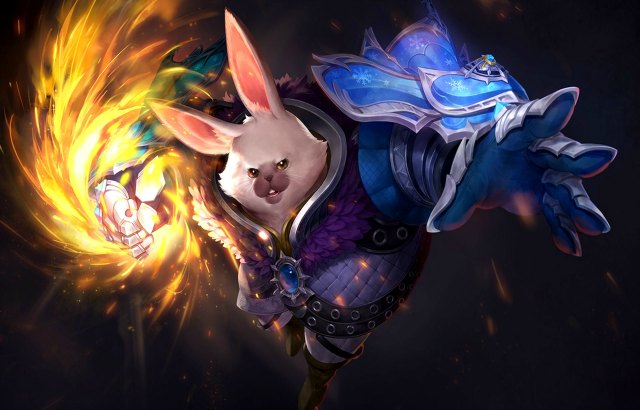 TERA is a free to play theme-park fantasy MMORPG, first released in Korea in 2011, before making its way to North America and EU in 2012. At time of release the game was favorably received by critics due to its combat system, dungeons, its graphics and its emphasis on BAMS, short for big ass monster fights among other things. It was also one of the earliest MMORPGs released this decade to embrace native game-pad and controller support, which would later pave the way for its console release many years later. Today, TERA is still alive and well and puts out new content once in awhile, as the console version tries to catch up with the PC version. Let’s dissect the 5 important aspects of this game.

If you’re looking for that one reason, just one, good reason to jump in and check out TERA, let it be for the combat system. TERA’s gameplay and combat utilizes an action system where you’ll use your reticule in the middle of the screen to aim at things, look around and interact with the game world. It’s incredibly easy to get into, movement feels fluid enough and that’s important due to how the combat works. Your class will have basic attacks that are executable by left clicking on your mouse, and you also have some kind of a dodge skill bound to your right mouse button.

Rounding up the basics are your HP bar and MP bar, the latter being your pool of mana that’s spent on unleashing class abilities and their subsequent combo chains. Each of the 13 classes have their own unique abilities that allows you to build a role within the trinity – DPS, Tank, and Heals – depending on the capabilities of the class, and to help you with that is the game’s incredible skill combo system. As you gain levels, you purchase more class skills to help you in numerous situations, from single target and AoE DPS, to CC and DoT etc, and the cool thing about TERA is you can customize the combo chain. How TERA’s combat system works, is that whenever you fire off a skill, a combo prompt appears that can be easily unleashed by hitting the space-bar. At higher levels, you can then chain one skill after another and thus many class builds you’ll find online strings the best DPS chains or situational chains and rotations to maximum effect, as combos often have synergies that drastically enhance the output of certain skills. It’s a real fun system and its aged pretty well. 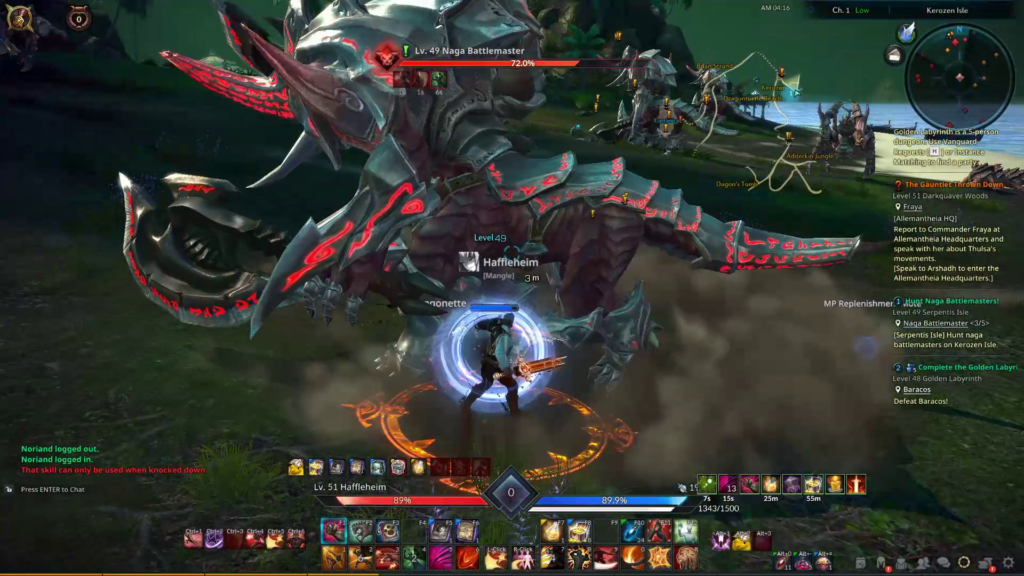 TERA hits all the usual marks for character and gear progression for an eastern MMORPG, and it’s fairly easy to get the hang of things. XP earns you levels, and more levels gives you better class skills, skill upgrades, and more. The most important thing in TERA is probably your gear and gear score at the end game. While leveling, gearing is irrelevant. There’s so many ways the game gives you free gear and low level materials to enchant them which will see you through to max level. Killing monsters can drop shards that lets you create a decent class weapon, which can be enchanted with all the mats you have.

Gear like armor and jewelry come from questing rewards from the main story or from trading in tokens from vanguard quests. You’ll also get crystals, for both weapons and armor that enhances various aspects of your build, like doing more damage from behind or taking less damage from boss monsters. Crystals can be upgraded and has a chance to break upon death. And then there’s class skill glyphs that you can slot to further customize your build, and it lets you reduce Mana cost of a skill for example, so in short, there’s a ton of things you can accomplish and all of these are important at the end-game as the best stuff bumps up your gear score, making it easier for you to do the hard mode content.

Main story and questing, grinding monsters, and there’s daily Vanguard quests, dungeons and PvP content. All of them offers experience points in varying amounts, some stupidly better than most. TERA’s main story is a linear traditional HUB crawl which takes you on a scenic tour around the world, completing tasks for the game’s main characters while uncovering decent story plot that could tie into dungeons and more. You’ll encounter side quests in maps you’re on for story content on the pretense that these give you more lore and backstory, but all of them are lazily designed, involving the fetching, killing, talking back and forth fiesta that one usually expects from theme park MMOs, but unfortunately they’re not worth doing at all because the pitiful amount of XP they offer in addition to the loot, makes them irrelevant. Forget they exist, and the game wants you to. Majority of the end-game fun comes in the form of chasing the ultimate class builds and dungeons are the way to get it. Dungeons has caps on the amount of times you can complete them too, so it does become a form of long term progression. Disappointingly perhaps, is TERA’s approach to PvP. Instead of proper PvP while leveling, we get mini-games. The one you’ll probably do often is Kumas Royale – this mode puts everyone into a sumo avatar, and one player on each of the two competing teams will be the mama, and must be kept alive. 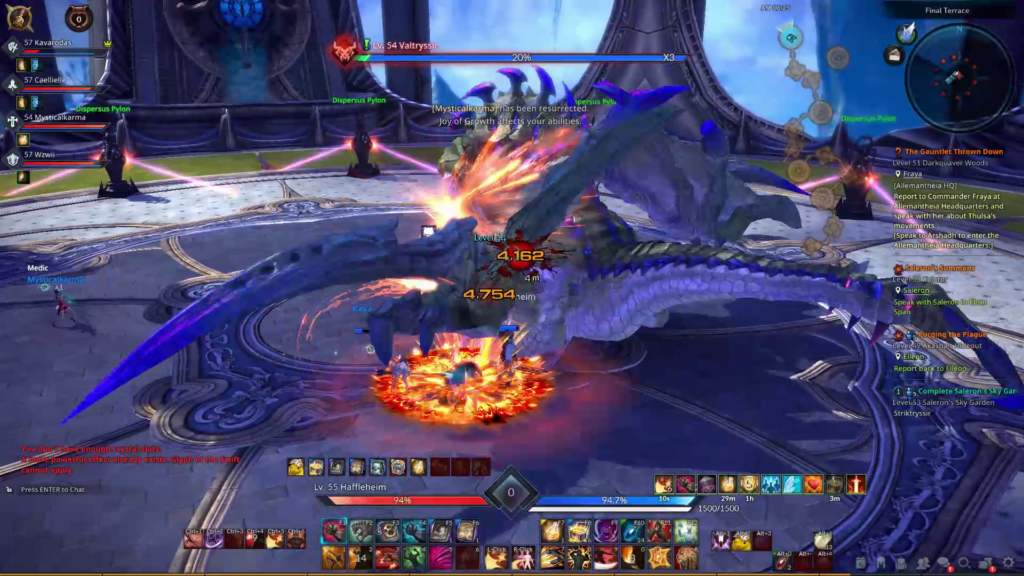 When it comes to the graphics, the look, the feel and the sounds of the game, many will argue that this is one of TERA’s weakest points. The zones, the environments and character models does look like a game made in 2011 for its 2012 western release, and on the highest graphic settings it’s not that bad really. It’s when you zoom in for a closer look on textures and the finer details is when things get unimpressive, either due to the muddy textures of gear or terrain. In the heat of combat which is engaging, none of these really matters and at least the animation for combat skills and combos makes up for what the graphics lack somewhat. Overall, the game’s presentation is best described as inconsistent or progressive, as it evolves over time. A good example of this is with the many story-cut-scenes, cinematics and voiced dialogues you’ll encounter as you play through the game’s main story. For a sample, here’s what it was like at vanilla..and yeah that’s pretty pathetic, versus what it’s like in the newer content, most notable, the Expansion’s story in Northern Arun. The good news is, it’s getting better, if aesthetics matter to you.

Can TERA be played entirely without spending a single penny? Yes, the game’s free to play model I found to be generous in comparison to the scores of other MMORPGs out there, especially the ones from the East. Story content is free, and you’ll come across no paywalls in your journey to the level cap which is where in TERA’s case, the best part about the game is in-terms of fun content. On the other hand, paying for TERA gives you many benefits in the form of convenience and leveling advantages. You can purchase an Elite status for 15 bucks a month which is the game’s optional subscription that grants you huge bonus to XP gains, rep boosts, double the amount daily quests, double the amount of instance access, no crystals breaking on death, instant revives, unlimited village atlas scrolls and even a flying mount, and daily EMP, which is the game’s cash store currency for as long as you’re an Elite status player.

There’s no in-between here, you’re either Elite and enjoying the game, or free and will have to make do with what you have, which by the way isn’t bad at all, as daily login rewards and achievements usually gives  you some of these premium items once in a while for free and you can snag some of em off the auction house for in-game gold too. The trade off for free players is that it’s going to take you slightly longer to achieve things, but that’s not too bad honestly.