What Would You Play If MMORPG's Died Tomorrow?

What Would You Play If MMORPG’s Died Tomorrow? 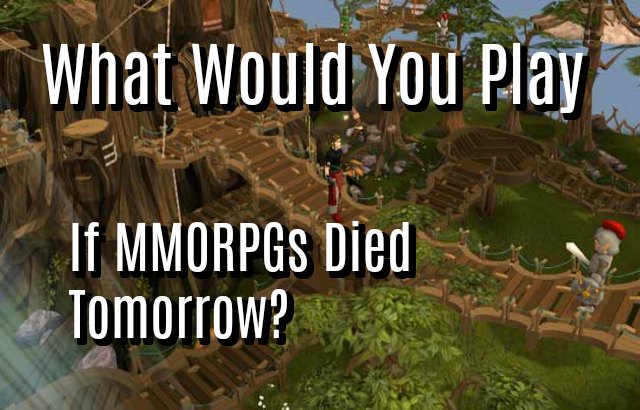 What Would You Play If MMORPG’s Died Tomorrow?

Imagine a world in the near future where MMORPGs are dead and gone. The industry shut itself down and all our beloved games had its servers turned off forever. What do we do and where do we go to get our MMO fix? I’ve contemplated this scenario many times. As an avid gamer, I’ve played a lot of games (I’m sure you have too) and I always look for games that have characteristics like MMORPGs. Is it linear like a theme-park? Does it have crafting? Will there be a robust character progression system for levels, gear and does it have a skill bar? All important questions, and I’m here to share my favorite games to play if the MMORPG disappears forever.

The sense of character progression is super important to me. I like a good, robust crafting system, where I feel like everything I do is a learning curve, improving my character the more I do it. In that sense, games like ARK and Conan Exiles does the trick. I’ve played both games aplenty (I favor ARK because I love dinos), and find that they offer more than their gimmick of survival. Both games have PvE and PvP. Sure there are no quests, but I do like that sandbox freedom. Grouping with friends to take down or tame a large dino in ARK is almost reminiscent of MMORPG raids. The lack of any main quest or story hurts, but the potential to have fun with friends is huge. And that’s important.

Other possible genres includes shooters. I’m not a big fan of them, but in time, things change. Especially how developers mix and match their influences into the games they make. Destiny 2 for example, has dungeons inspired by World of Warcraft. For a shooter, one can only imagine how that’ll play out with a gun and cross-hair. Not to mention, the loot system in Destiny is a good thing as well. MMO players love loot, so why not hunt em with guns. On the other end, there’s the upcoming Dauntless. In a small party, you and your group of friends can hunt monsters together. Killing them drops important items for crafting, to get better weapons. I like the premise a lot, and to me it’s what Evolved Stage 2 should be. More emphasis on team work rather than style. I’m excited to see more games outside of the MMORPG sphere take on its influence.

And of course, there’s the large scale big name RPGs to play should the MMORPG world fade away. I’ve always been a fan of single player RPG games. They provide rich, deep and cultured worlds, stories and characters that stay with you years after you finish the game. Dragon Age: Origins comes to mind, but Inquisition is the one I’m in love with. The quality of the cut-scenes, story telling and more have only improved with technology. Within the game, you can already notice how close to an MMORPG it actually is. Its got huge biome map areas, all connected via loading screens. You harvest mats out in the world to craft better gear, and the game is littered with side quests, but not in a good way. The characteristics are there, but with a new Dragon Age game in the works, they can refine these systems. Hopefully, that’ll provide us with an excellent single player RPG game that offers a tiny touch of MMO (co-op maybe?) that’ll cure my MMO itch.